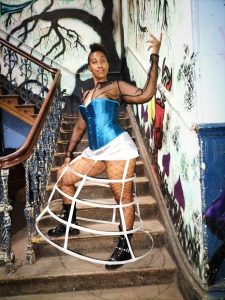 “North of England humour is in fact one of the hallmarks of the show……. A thoughtful portrayal of an engaging character by a consummate actor with many interesting observations; well worth seeing.” – Reviewer Number 9

“…I found the vagueness of time and place, along with the circuitous shape of Bessie’s story, very compelling. I do enjoy uncertainty!…… this one’s a recommendation from me.” – She-Wolf

“With the delicate grace of a ballerina, she leaps about the stage delivering tales and characterisations. Punchy, uplifting and sobering dialogue is given life from under a smoggy layer of belted-out Northern humour.” – Buxton Fringe Festival reviewer 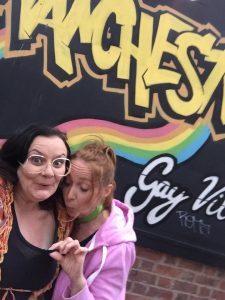 “Bradford Playhouse delighted to the very human, funny, troubling “Strife In A Northern Town” deftly directed by Rhonwen McCormack, and performed to captivate and disturb Saturday’s audience in a sure success…… A very funny play, definitely go see it (if there are any tickets left, they are selling fast.) “ – Yorkshire Gig Guide

“This lively comedy is a very enjoyable show with some clever direction from Rhonwen McCormack. So many character changes is exhausting, so be prepared, but they were skilfully done and the essence of mayhem ensued.” – Buxton Fringe Festival reviewer

“Tracy Gabbitas and Jennifer Banks (who wrote this piece) performed “Strife In A Northern Town” at a breakneck pace. With countless costumes and characters it is clear many hours of rehearsal with director Rhonwen McCormack have gone into getting this play to the point it is today……..”Strife In A Northern Town” is a good fun night out and is performed fantastically by Gabbitas and Banks, and supported by a superb sound department which fills the gaps between sketches with music which has its origins in the north. Gritty, honest northern humour!” – North West End 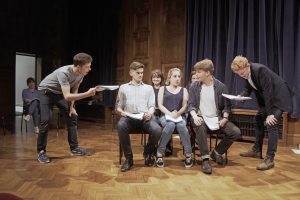 “This full length, script in hand performance was enthralling from the first moment to the last and expertly performed by a young cast with an exciting future ahead of them. Equally director Rhonwen McCormack’s decision to re-start productions with her Blue Masque Theatre paves the way for an exciting future if tonight’s performance is anything to go by.” – North West End

“Why Does Everybody Want To Move To Australia?” by Rhonwen McCormack

“This rehearsed reading has real promise……As the story unfolds you find yourself relating to the characters and sympathising with the barriers put in their way to achieve their dreams and also the obstacles they have to overcome to fulfil those same dreams……Keep an eye out for this play making a return soon, grab a ticket and go find out. You’ll have an entertaining evening and hopefully like me an educational one also.” – North West End