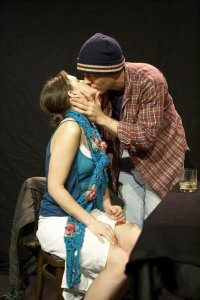 Blue Masque Theatre opened in January 2007 with a launch production of “American Haiku” at the Jermyn Street Theatre in London. This collection of ten-minute plays, all previous competition winners from the Humana Festival at the Actors Theatre of Louisville in Kentucky, was performed with a predominantly American cast. The plays were: political satire “Perfect” by Mary Gallagher; still and atmospheric piece “Bread” by Andy Backer; wild comedy “Pillow Talk” by John Pielmeier; darkly manipulative “Cover” by Jeffrey Sweet; and bittersweet romance “The Interrogation” by Murphy Guyer.

The second production in 2007 was “Coitophobia” by Maria Roberts, which was taken to the Edinburgh Fringe Festival and nominated for the Amnesty International Freedom of Expression Award. This was a dark comedy drama about unusual relationships tinged with the memory of domestic violence. It received touching feedback from some members of the audience.

After a paused period, due to raising young children and the Global Financial Crisis, Blue Masque Theatre relaunched in 2017 with two staged playreadings at the Waterside Arts Centre, Cheshire, as part of the Greater Manchester Fringe Festival.

The first, an adaptation of Sinclair Lewis’ alternative history novel “It Can’t Happen Here” by Tony Taccone and Bennett S. Cohen, was the first performance in the United Kingdom of this Berkeley Repertory Theatre script, and was nominated for Best Revival in the GM Fringe awards. Performed by a cast of recent acting graduates from the Manchester School of Theatre, it was a timely dystopia exploring the effects on 1930s America of a Trump-like dictator coming to power. 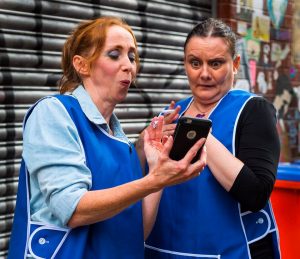 The second was a new comedy by Rhonwen McCormack called “Why Does Everybody Want To Move To Australia?” (now being redeveloped as “Paradise Down Under”), which explored the British fascination with emigrating to Australia, and the myths and wish-fulfilment behind those desires. It received a very positive audience response.

In 2018, Blue Masque Theatre co-produced with Capricious Rose Productions a new working-class comedy by Jennifer Banks called “Strife In A Northern Town”. It went on a tour of small-scale spaces from London to the North, with visits to the Buxton Fringe Festival and Leeds Comedy Festival on the way. Two actors played ten different riotous characters, and the production sold out in most venues. It was nominated for “Best Show” at the national Funny Women Awards. 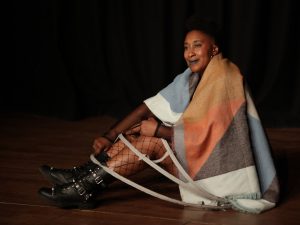 Production was paused again during the COVID-19 pandemic. In 2022, Blue Masque Theatre relaunched once more with “Bessie At Midnight, Alone” by Derek Martin. This new one-woman show about a harlot who’s not fixed in any particular time period toured more small-scale spaces, taking in the Buxton Fringe Festival, Greater Manchester Fringe Festival and Birmingham Fest on the way. Its actor Janelle Thompson won “Best Newcomer” at Birmingham Fest.

Blue Masque Theatre has been selected for development via the BRIDGE programme (subsidised by Arts Council England); been selected as a local company for digital theatre skills training at Manchester International Festival; and has previously been selected by Trafford Council’s Creative Development Scheme.